This quote tells you everything you need to know about what went wrong.

This summer when visiting my folks in St. Louis, I said, “I don’t think Trump can beat her, but she could lose. There’s a difference.” In the aftermath of what really ought to be the final death knell in the would-be Clinton political dynasty, this quote attributed to Chuck Schumer makes it plain to see how awful the political instincts of these Democratic centrists really are. 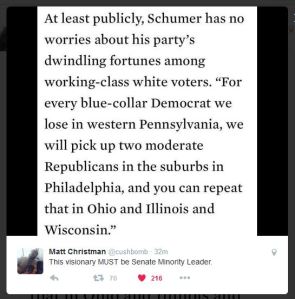 Though it is possible that someone has misquoted Schumer, the sentiment expressed here was unmistakably at the heart of the Hillary Rodham Clinton (HRC) campaign. To be clear, it almost worked. Clinton got enough votes to win the popular, but lost the Electoral College based on Trump’s clean sweep of Michigan, Ohio, and Wisconsin. She lost those states on a quixotic chase after so-called moderate Republicans, who would never, ever vote for her. I told my mom the Friday before the election that Trump had to win the tossup states and flip two that usually go blue to win. He did just that.

Again. He really didn’t beat her. Her losing is the story.

As I see it, there’s two parts to this: (1) the votes Trump won; (2) the votes HRC didn’t. There is some overlap, but she mostly lost votes from people who opted out.

The alt-right racists and the “never-a-woman” crowd got Trump a lot of his vote totals. Based on the data I saw (and always take early exit polling with a huge grain of salt) he dominated on White voters. But for all the talk of blue-collar “angry White guy” revolt, Trump’s staunchest support came from the $50k-and-up small business owner types. One area you have to give him credit in is beating her with the White people who are the apple of her eye. To her credit, she did okay with less well off Whites.

Here’s the thing though. Trump’s level of support shouldn’t have been enough to win the White House. In fact, I actually wonder how far off the models were about his performance (if at all). The models didn’t think he would be impressive, and he wasn’t. As I understand it, he slightly underperformed McCain’s and Romney’s respective totals in 2008 and 2012. (Remember. Those two performances prompted all manner of “woe-is-me-soul-searching” among Republicans about whether they could ever win the White House again.) It’s hard to imagine ANY Republican nominee–Jeb, Rubio, Cruz, etc.–performing considerably worse than Trump just did.

Record low voter turnout is why she lost. In no way do I mean to minimize or discount sexism and racism or the weight of the faux-scandals in this election. But those factors mostly explain the votes that Trump got. They are less compelling explanations of the votes she didn’t get. The most compelling explanation for that is catastrophic strategic failure. Put it this way. In the waning days of the campaign, she was running ads featuring prominent Republican endorsers here in South Carolina. “Goldwater girl” to the last, I guess.

The Clinton team made it abundantly clear in the 2008 primaries that a 50 state door-to-door campaign to GOTV was old-fashioned. She would win, they said, with record-breaking fundraising and by sticking to the urban and suburban areas with high strategic value in the general election. They believed that right into 2016. HuffPo has a piece out today saying the HRC team relied on “small organizing,” which includes micro-targeting via text/direct, mail in lieu of traditional boots on the ground. Of course, all modern campaigns use micro-targeting. It’s an issue of emphasis.

When you put micro-targeting at the heart of your GOTV strategy you are running a low-turnout campaign. As Meredith Rolfe shows, candidates have a decent amount of say over whether an election has a “high” or “low” turnout in the aggregate. They control the presence of environmental cues that signal to people that others are (or are not) voting. It’s the lawn signs, the campaign buttons, the door-to-door canvassing, the buzz — all the stuff micro-targeted campaign messaging, by definition, does not provide.

The much disparaged Podesta emails also appear to show that the DNC (far too often in the role of surrogate, or at least inappropriately ardent supporter, of the HRC campaign) has spent considerable effort disciplining and de-funding the state and local party volunteers most responsible for mobilizing actual voters. If that is too conspiratorial for your taste I’ll put it another way. Republican voter suppression–an entirely predictable matter, given a gutted Voting Rights Act–worked in a number of states that Clinton needed, Wisconsin among them. The governor has declared open warfare on election-day registration and student voters. Surely, the GOTV efforts there were the most sophisticated given the level of Republican opposition. I mean, voter suppression in Wisconsin doesn’t even have to be framed as a race issue. Nope. As I understand it, Clinton never even campaigned in Wisconsin post-convention. That is face-to-palm, head shaking stuff. Evidently, the organizing principle of the campaign was that the corporate types in White Fish Bay and Appleton would more than offset any suppressed votes in Madison and Milwaukee.

Whether through its callousness or incompetence (does it really matter which?) the Clinton campaign convinced scores of the party’s base voters that their votes didn’t matter. (Of course, the only ones the national talking heads give a rip about are blue-collar White guys.) Not shockingly, many stayed home. Her loss was not so much a matter of blue-collar White guys flipping to Trump. They picked him, not the other way around. As always for the Democrats, the loss really came down to who stayed home. Clinton needed a high turnout election by playing to the party’s base rather than to its power brokers. She got record low turnout and was running ads featuring Republican endorsers into the final week.

This site uses Akismet to reduce spam. Learn how your comment data is processed.